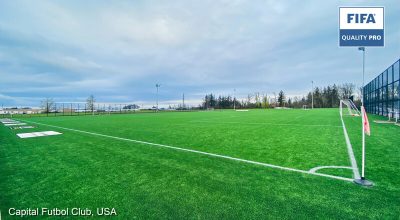 What are the advantages of artificial rugby pitch

When talking about rugby, mostly refer to Rugby Union, which was first introduced to English schools in the 19th century. Since then, the sport gained worldwide fame and grew to be one of the biggest sports in England, the USA, South Africa and New Zealand.

Since rugby is a very intensive contact sport, it is critical to play on a safe and shock resistant rugby pitch surface for preventing injuries. Today more and more rugby fields use an artificial pitch as their primary surface.

Consistency means the rugby pitch never changes. Artificial grass doesn’t get soft when there’s been a lot of rain and it never dies. So you won’t see dust everywhere and get muddy patches into the grass.

The surface of the rugby pitch remains the same even from match to match, practice to practice. Even if a section does get damaged, you only need to replace that section.

Since the surface of the rugby pitch maintains consistent traction and shock absorption at all times, players can get used to the surface they will be playing on and achieve better results during the game. This is also a benefit of consistency.

Economy means the artificial rugby pitch is easier for the club to deal with than natural grass.

The rugby turf systems from CCGrass, incorporate long length fibres (pile height), filled with performance padding and laid over special shock pads. We ensure that all our systems include a tested and approved pad, and sand and resilient material infill.

* World Rugby is the recognized governing body for Rugby Union and Rugby Sevens, setting the rules and principles while overseeing the game. Its values are Integrity, Passion, Solidarity, Discipline and Respect.

Which rugby clubs have artificial pitches?

Currently, a number of clubs in both the URC and the Gallagher Premiership use artificial pitch surfaces, with the likes of Saracens, Worcester Warriors, Newcastle Falcons, Glasgow Warriors and Cardiff Rugby all applying the technology.

We have offered a lot of professional rugby fields worldwide, which are popular with some top rugby clubs like Munster Rugby. Also, our rugby fields have been used for International U-20 rugby, Pro 14, Premiership training and academy pitches, as well as local schools and clubs.

We are keeping Research & Development of artificial grass products, providing high-quality surfaces. And we are so proud to be a World Rugby Preferred Turf Producer, practising our ability to meet the rigorous standards and our support for the regulatory process by World Rugby.

Click here to see our collections of rugby fields:

The Ottawa Aces XIII will follow in Wolfpack’s footsteps. Both the two cities used or will use artificial turf for their professional rugby league sports teams.

Also, looking at rugby union, another advantage of artificial rugby pitch is that it brings professional opportunities for MLR players in North America. Same as the Toronto Wolfpack, the Toronto Arrows plays at Lamport Stadium and the Rugby United New York plays at a ballpark at MCU Park.

This is especially true for countries that do not have the resources to grow the rugby sport on natural grass.

By now, you should have learned about the advantages of an artificial grass rugby pitch, we are the world’s leading artificial grass manufacturer, is dedicated to providing the best artificial turf for both sports and landscape purposes. For more information, please feel free to call us at +86 25 6981 1666 or email us at [email protected]